Currently when you want to build a chat bot in Microsoft Bot Builder you have to deal with the rather complicated dialog system. I really don't like it, but there isn't a very good alternative yet. I do think however that there are a few ways in which we can do a better job. For example, can you build a chatbot using streams and actors?

In this post I will show you how I made a chatbot library with Akka.NET that uses streams and actors to model the chatbot.

So why streams? When I look at chatbots, I think of an application that can send and receive messages. So initially, I built a chatbot that used the actor model to shape conversations.

Each conversation in this bot is an actor. In front of the conversation actor there's a dispatcher that routes incoming activities to the right conversation.

This idea works really well, but is it the best way? I don't know.

Which works best is up for debate, but I had to try it.

Your bot framework isn't any good if it doesn't have a good name. Meet Gadget, the bot framework that allows you to build conversations as streams. 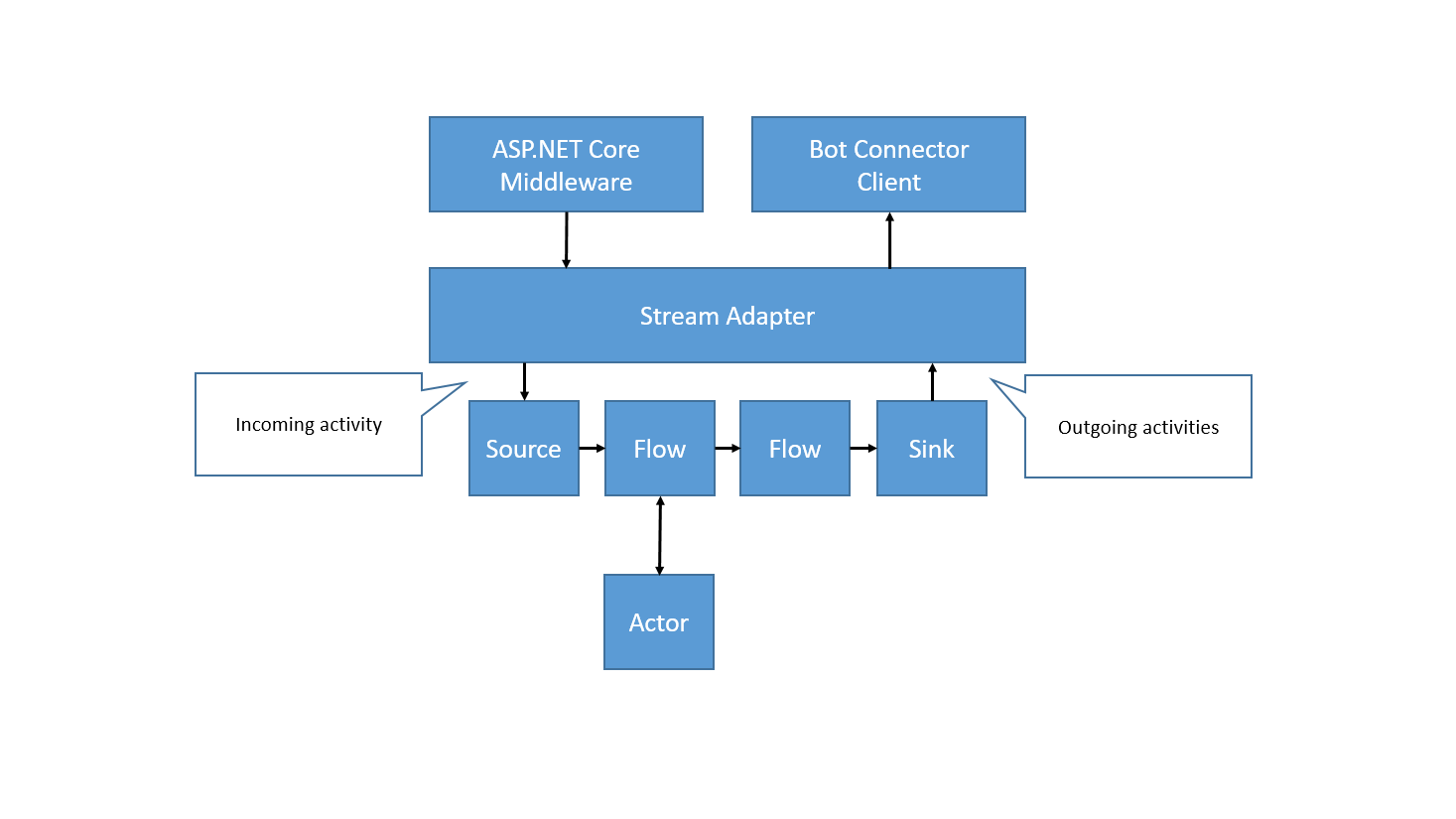 There are three layers to this:

Currently, the Bot Builder SDK v4 doesn't offer something like dialogs. But that's not a problem, since I'm not using them anyway.

In order to build a bot with Gadget you need to create an empty ASP.NET Core project. You can do this with the following command:

This creates a new C# project with just the ASP.NET Core dependencies set up. Now you need to write up Gadget in the project.

First, modify the Startup.cs file and include one additional line in the ConfigureServices method:

This adds the necessary services for the GadgetBot library. I will use the EchoFlowProvider, which we'll implement later on. Finally I provide a credential provider that uses my application configuration.

The credential provider will provide the AppId and AppSecret for the Bot on Azure. You need this to communicate with the bot through things like Facebook or a WebChat client.

The final step to configure the bot, you need to add one line of code to the Configure method:

With the bot setup, let's build the dialog flow. The EchoDialogFlowProvider needs to provide a Flow<IActivity, IEnumerable<IActivity>> instance that is going to connect the source of the stream with the sink of the stream.

To make a simple echo dialog flow the EchoDialogFlowProvider returns a flow that simply copies the input text to the reply activity.

The dialog flow provider works like this. It first creates a new flow element. A flow element accepts one input and one output. In our case, we accept one incoming activity and produce a set outgoing activities.

To implement this we first filter out all activities except for messages. Next, we convert the type and create a reply to it, by copying the text from the original activities. Last, but not least, we convert the output type to the expected type for the flow.

As you can see, you can use Linq statements to work with the conversation data. Which is quite a nice touch if you ask me.

Other than that, the dialog flow is pretty fast and scalable, because it is based on Akka.NET, which ensures optimal usage of hardware.

Is this the perfect bot system

Although the idea is cool, I'm not sure yet if this is the best solution to build a chatbot. Do give it a try and let me know. The code is up on Github: